Sri Lankan Electorate Give Benefit of Doubt to Rajapaksas’

The fact is that majority of people have voted for Rajapaksas’ giving the President and Prime Minister brothers the benefit of doubt, inspite of their nearly unimpressive governance.
by N.S.Venkataraman
As predicted by several pollsters, the ruling Sri Lanka Podujana Peramuna party (SLPP or People’s party) led by Rajapaksa brothers has gained majority in the Sri Lankan parliamentary election. This verdict is no surprise, particularly considering the anxiety of Sri Lankan citizens, who want strong leadership . 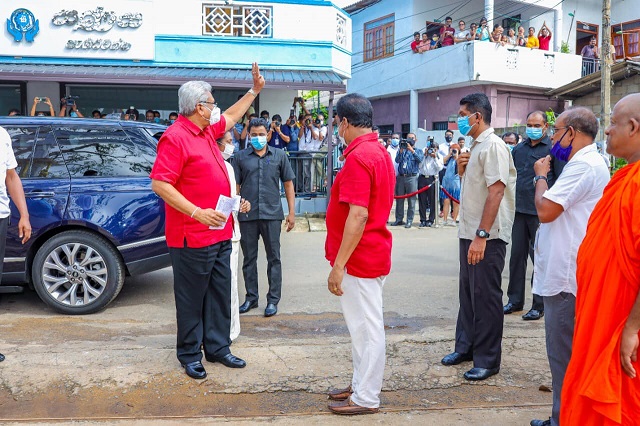 President Gotabaya Rajapaksa getting ready to vote for the election. While Rajapaksas’ have gained overwhelming majority , this does not really mean that majority of the people are entirely satisfied with the style of governance of Rajapaksas’ during the last few years.
Obviously, Sri Lankan people , owing allegiance to different religions and life style, must have carefully weighed the options before them and must have decided that Rajapaksas’ are the best option in the given circumstances, though they very well know that Rajapaksas’ are not blemishless leaders.
It is a fact that most of the Sri Lankans including Sinhalese and section of Tamils feel grateful towards Rajapaksas’ for decisively defeating the secessionist forces and restoring the territorial integrity of Sri Lanka. What Rajapaksas’ achieved is what several Presidents and Prime Ministers before them could not do….