My relationship with the President grew and the bilateral relationship between Sri Lanka and Australia prospered. With what I took to be considerable sincerity, he asked me to work with a small group of his confidants looking for a pathway to peace with the LTTE.

He was a delusional tyrant damaging the good name of Sri Lanka. Sure, he had out-terrorized the terrorist Singhalese Marxist Janatha Vimukthi Peramuna (JVP) which had brought the country to its knees, but he was using this success and the bloody fight with the powerful separatist Liberation Tigers of Tamil Eelam (LTTE) to excuse harsh methods of dealing with his opponents. The judiciary had been cowed and his visionary economic and infrastructure reforms were being used to enrich himself and his cronies. 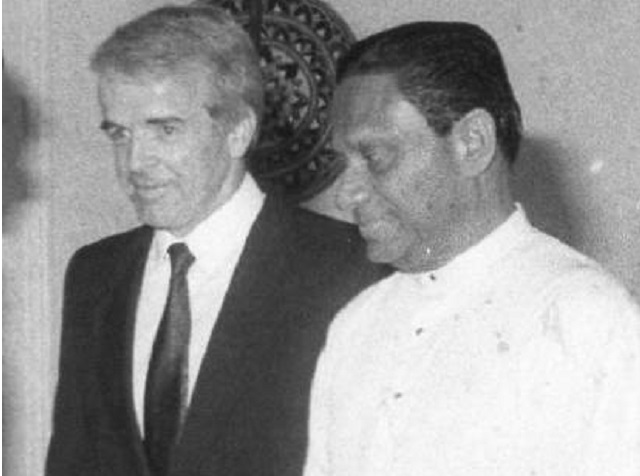 So said Sri Lanka’s wealthy upper class who, before the lesser being of Ranasinghe Premadasa shouldered his way into the Presidency in 1989 upon the retirement of the viciously imperious J R Jayawardene, had been very comfortable with their self-serving ways of running the country since the British left in 1948.
But, however cautionary these views may have been, along with dark reminders about his recent expulsion of the British High Commissioner, my job as Australia’s newly arrived High Commissioner to Sri Lanka in early 1992 was to get close enough to Premadasa for him to listen to Australia’s views on human rights, trade and investment, aid, and, on the broader stage, nuclear non-proliferation and the control of chemical weapons.
From our first meeting at the presidential mansion, Sucharita, we got along well. He made it clear he would be pleased to see more of me, one-on-one. That I should not be a stranger….